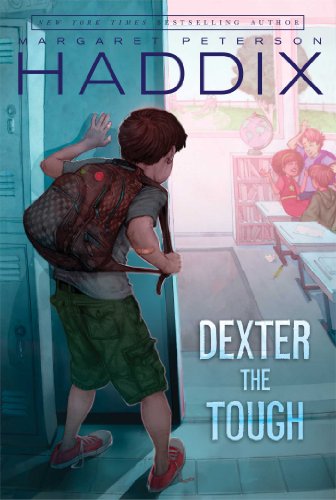 Dexter hated his new school already," opens Haddix's (the Shadow Children series) poignant if plodding novel about a fourth-grader who, on his first day at school, gets laughed at by other kids when he slips and falls on the newly polished floor. In class, his "sparkly, enthusiastic" teacher ("He hated that kind of teacher") tells her students that she wants them to write a story that lets her know more about who they are. Dexter writes, "I'm the new kid. I am tuf. This morning I beat up a kid." The author gradually reveals the details behind the incident (mortified by his peers' laughter, Dexter impulsively punches Robin, a boy he encounters in the bathroom) as well as the true source of his anger. While his father receives cancer treatments in Seattle, Dexter must live with his grandmother in Kentucky. In several rather repetitious meetings, his patient teacher encourages him to flesh out his story, asking Dexter questions that help him acknowledge his feelings, including his resentment at being left behind by his parents, his concern about his father and his guilt about hitting Robin. As he comes to terms with his emotions, Dexter accepts the friendship that kind Robin offers, which (along with the news that a bone marrow donor for his father has finally been found) brings the tale to an upbeat close. Though Haddix creates some realistic scenes and shapes a sympathetic protagonist, readers may find the narrative's pace frustratingly poky. Ages 7-10.