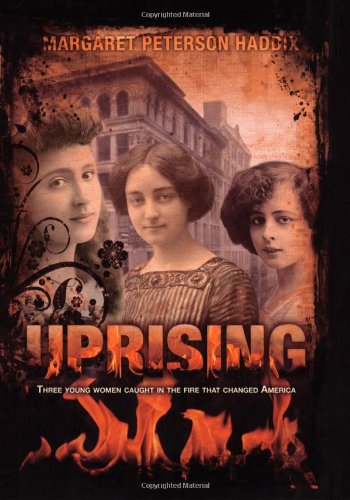 Although it begins in a didactic tone, this historical novel about New York City's Triangle Shirtwaist Factory and the catastrophic Factory fire hits its stride to offer a compelling message about labor, sacrifice and the price of freedom in America. Haddix (the Shadow Children series) follows three very different girls: naïve Bella from Italy, who becomes a strikebreaker; the feisty Yetta, a Jewish immigrant from Russia who spearheads the strikes; and the socially prominent Jane, raised to marry for status and prestige. The pace and interest pick up once the infamous 1910 strike begins and the girls' experiences collide. The author ably motivates the various characters, for example, Yetta repeatedly survives beatings and incarceration for her convictions; Bella joins the strike only after learning her family has died and her landlords have stolen her savings; and Jane follows college friends to the picket line but returns of her own accord. Several well-sketched supporting characters highlight the broader effect of the struggle, such as Jane's chauffeur, who cheers her participation. The portrayal of the fire, which killed 146 workers, and its legacy memorably drives home both the bravery of girls who stood up to the powerful factory owners and the highly personal cost of progress. Ages 12-up.