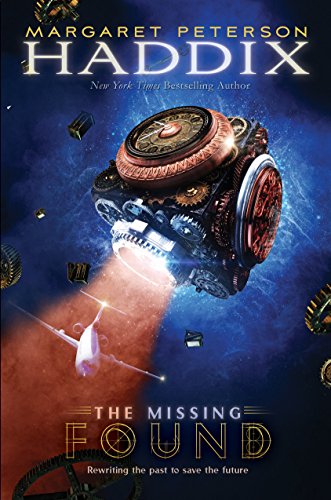 In a tantalizing opener to a new series, Haddix (the Shadow Children series) taps into a common childhood fantasy—that you are really the offspring of royalty or famous people, and were somehow adopted by an ordinary family—and one-ups it by adding in time travel. As the novel begins, a brand-new airline employee experiences an event that she is later told never to talk about: a plane carrying 36 babies, and no one else, not even a pilot, shows up without warning at a nearby gate. Fast-forward 13 years, and two 13-year-old friends, Chip and Jonah, are receiving mysterious notes, with messages like “You are one of the missing” and “Beware! They’re coming back to get you.” Only then does Chip learn that he, like Jonah, is adopted. Joined by Jonah’s sister, Katherine, the boys investigate and discover that the FBI was involved with their adoptions. These smart kids show initiative and do a great job using familiar technology (camera phones, photo-editing programs, etc.) to get information and track down other adoptees. By book’s end they are trapped by some shady characters; learn that they are among the most famous missing children in history (e.g., Virginia Dare, the 15th-century English princes in the Tower); and get sent back in time. Readers will be hard-pressed to wait for the next installment. Ages 8-12.