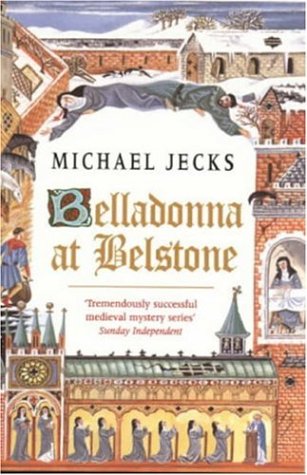 When Moll, a young nun, dies mysteriously at St. Mary's Priory in Belstone, England, the suffragan bishop orders Sir Baldwin de Furnshill, Keeper of the King's Peace, to investigate. Together with Bailiff Simon Puttock, his assistant in seven other puzzles in Jecks's delightful medieval series (The Last Templar, The Crediton Killings, etc.), Baldwin travels to Belstone, which is in a disgraceful state; greed, drunkenness and sexual license have all but destroyed the spirituality of its inhabitants. Baldwin and Puttock learn that Moll was a pious girl, who, shocked at Belstone's corruption, had seen it as her sacred mission to cleanse the priory. If saints are not easy to live with, Moll had been no exception: ever-so-sweetly, she had pointed out the considerable faults of her companions, urging each to confess and reform. No wonder that when she was found dead in the infirmary after having been bled for a migraine, no one was sorry. And indeed Moll's death, the investigators realize, was no accident. Two more novices will die before--in a stunning denouement--the author reveals the killer, who turns out to be one of the few likeable characters in this wickedly amusing romp. If the prose is sometimes choppy and repetitious, perhaps it is due to the proliferation of bells in the story, starting with the title. Throughout, bells summon nuns and clerics to prayer at regular intervals, day and night. One wonders when they find time for so much mischief. (Apr.)
close
Details