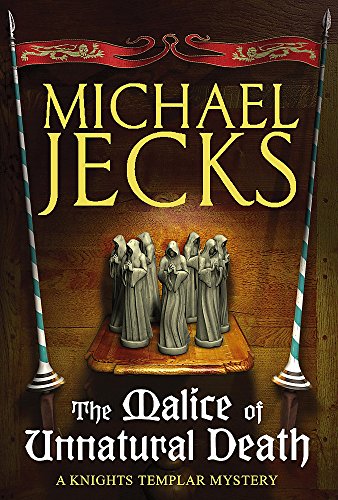 The Malice of Unnatural Death

Without the character list, glossary, maps and author's note, a reader could get lost in Jecks's 23rd Knights Templar mystery (after ), but the tale, set in 1324 Exeter during Edward II's corrupt regime, is no less gripping for its complexity. Esteemed Knight Templar turned investigator Sir Baldwin de Furnshill reluctantly joins London's fledgling parliament after the Bishop of Exeter suggests that the king's French wife might be part of a conspiracy against the throne. Soon an inquest into several mysterious deaths uncovers further evidence of a plot centered on the nefarious work of John of Nottingham and Richard de Langatre, necromancers who have found a way to assassinate prominent personages using “mommet” dolls and bone needles. Fear and speculation spread with the discovery of several corpses, including a royal messenger buried in a rubbish heap. Stirring intrigue and a compelling cast of characters will continue to draw accolades from fans of the author's hefty historicals.