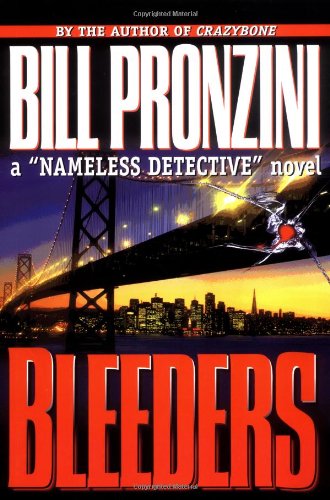 At age 60, Pronzini's Nameless Detective has been through the wars more than two dozen times in such singular mysteries as and . Now the San Francisco–based PI has acquired a daughter, a home and a name—"Daddy"—that may portend retirement if he can solve a case that spirals from simplicity to murderous complexity in a heartbeat. Hired to safeguard a blackmailed husband's final payoff, Nameless is almost killed and his client is murdered. In addition, the money, the husband, the husband's mistress and a vicious killer all go missing. Nameless has patrolled the mean streets of San Francisco for a long time, and nobody knows them better or performs the traditional PI role better. But age is telling, and his near-death experience has Nameless re-evaluating his relationship with lover Kerry and orphaned Emily. However, before he can resolve his future, Nameless must descend once more into the San Francisco underworld of drug dealers, grifters, users and other "bleeders." Pronzini's storytelling is straightforward, honest and effective. The settings, from the city's slums to its coastal highways, are vividly drawn, and the tawdry denizens Nameless must confront to recover the ransom and find a killer are utterly convincing. Nameless, as suggested here, may be on the verge of a well-earned retirement, but he's in top form as he often has been in Pronzini's award-winning series.