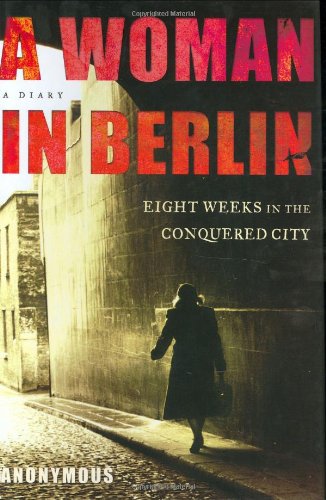 A Woman in Berlin: Eight Weeks in the Conquered City, a Diary

Anonymous, then a 34-year-old journalist, started this eight-week diary in April 1945, when the Russians were invading Berlin and the city's mostly female population was heading to its cellars to wait out the bombing. Anyone who was able looted abandoned buildings for food of any kind. Soon the Russians were everywhere; liquored-up Russian soldiers raped women indiscriminately. After being raped herself, Anonymous decided to "find a single wolf to keep away the pack." Thanks to a small series of Russian officers, she was better fed and better protected at night. Her story illustrates the horror war brings to the lives of women when the battles are waged near a home front (rather than a traditional battlefield). In retrospect, she advises women victimized by mass rape to talk to each other about it. Once the war was officially over, the real starvation began; by the time the author's soldier boyfriend returned to Berlin, she was too hungry and hurt to deal with him. When the radio reported concentration camp horrors, she was pained but unable to quite take it in. The author, who died in 2001, has a fierce, uncompromising voice, and her book should become a classic of war literature. First published in 1954, it was probably too dark for postwar readers, German or Allied. Now, after witnessing Bosnia and Darfur, maybe we are finally ready. New translation includes previously untranslated portions.