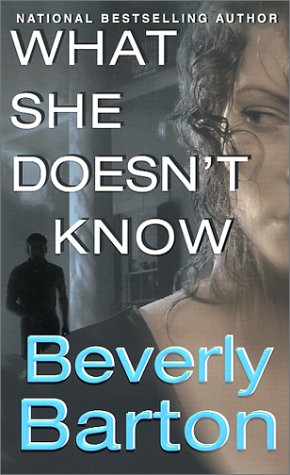 WHAT SHE DOESN'T KNOW

Two mysteries and multiple romances dovetail nicely in this tightly woven romantic intrigue from popular Silhouette series author Barton (). When her father dies, Jolie Royale is summoned to Belle Rose, her family's estate in Mississippi, by her brother-in-law, Max Deveraux. Jolie hasn't been home in 23 years, not since she was shot and left for dead in what would later become known as the Belle Rose Massacre. Her mother and aunt were murdered that night, ostensibly by the family handyman, Lemar, who later committed suicide. Although some doubted Lemar's guilt, Jolie included, the county sheriff didn't hesitate to lay the blame on the dead man's shoulders and close the case. Upon her return, Jolie regains control of Belle Rose and joins forces with Theron Carter, Lemar's nephew, to reopen the case and air long-buried family secrets. But when Theron is assaulted and Jolie is shot at, Max designates himself as her personal bodyguard and aids her in untangling the Belle Rose mystery. Revelation upon revelation will hold the reader's interest, and the fast and furious sex scenes between Jolie and Max should please Barton's many fans. With its sultry Southern setting and well-drawn characters, this richly textured tale ranks among the best the genre has to offer.

(Mackenzie's Pleasure/Defending His Own Romantic Times