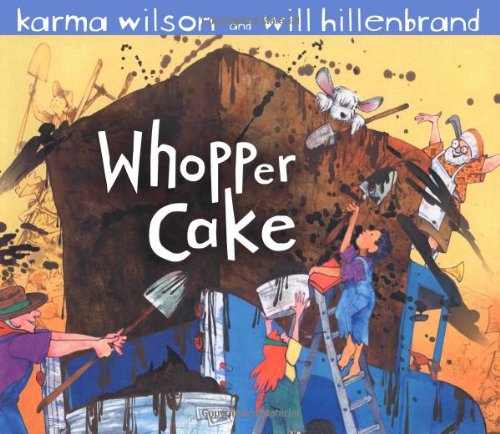 Wilson ( ) and Hillenbrand ( ) cook up a sweet and jaunty picture book. Their protagonist, Granddad, falls in the bigger-is-better camp, at least when it comes to his wife’s birthday celebration. Despite her protestations (“Don’t make a fuss, you hear?”), Granddad has an itching to whip up one heck of a confection in her honor. With two canine sous chefs, Granddad gets to super-sizing a chocolate cake recipe that ends up baking in the pick-up truck bed rather than in the tiny conventional oven. Kids will delight in Wilson’s bouncy rhyming stanzas flavored with down-home vernacular and the slapdash slinging and flinging of eggs (86), flour (10 bags) and cocoa (24 cups) by Granddad and pups in playfully energetic mixed-media spreads. No one can argue with Granddad’s defense to his astonished birthday gal: “Your heart’s so big, you deserve a whopper cake!” A chocolate cake recipe (of realistic proportions), with directions in the couple’s dialect, is included. Ages 4-8.