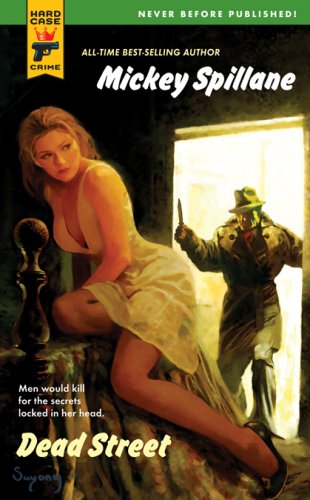 One of a handful of novels he was working on at the time of his death, this fine, perhaps final, work from hard-boiled fiction icon Spillane (1918–2006) was prepared for publication by Hard Case vet Max Allan Collins. In it, NYPD detective Jack Stang receives word that his old fiancée, Bettie, who supposedly died in a kidnapping-gone-wrong 20 years earlier, is still alive and residing in a small Florida coastal community. The good news is countered by the fact that, in the car crash that was supposed to have killed her, she lost her eyesight and all her memories. Even worse, the men who had her kidnapped in the first place have perfectly good memories and are still looking for her—and willing to kill for the information locked in her damaged brain. This is a more sentimental Spillane than readers might expect, but the women are still “dolls,” the bad guys are still louses, and the hero still packs a helluva punch (along with his trusty .45, natch). Spillane always said he wrote for his fans, not for the critics, but both should be pleased with this late addition to the writer's canon.