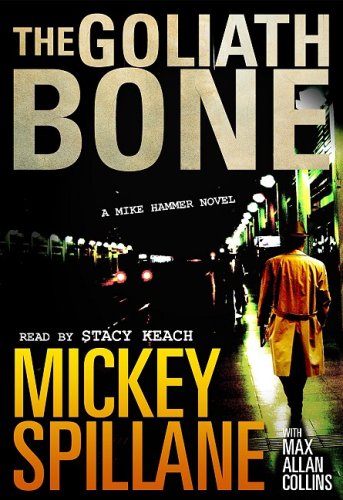 This isn’t your father’s Mike Hammer. More like your grandfather’s. Though he’s now a self-admitted “member of AARP,” Hammer remains as tough as a boiled owl as he sleuths a series of murders involving the femur of the original giant Goliath, a collectible more valuable than even the Maltese Falcon and considerably more political, thanks to its significance to factions in the Middle East. As Mike hammers terrorists, extremists and slinky seductresses, almost every sentence refers to his senior citizenship, but this audio renders such reminders unnecessary. Stacy Keach, arguably the private eye’s best interpreter, has been aging along with him. His well-trained voice carries the perfect combination of unwithered age, strength and determination. According to Collins’s afterword, though three more incomplete manuscripts exist, the late Spillane had planned to be his hero’s chronological farewell. And a fine send-off it is, reflecting back to the very first, , with Keach adding a poignancy that even a tough guy like Spillane would have appreciated.