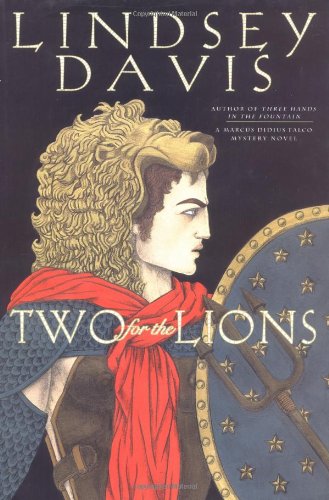 Two for the Lions

Talk about capital punishment: in the Rome of A.D. 73, top criminals are torn to pieces by a specially trained lion. And when that lion is himself found murdered with a spear, who better than Marcus Didius Falco, the Sam Spade of ancient Rome, to handle the case? Davis's 10th Falco adventure (after last year's Three Hands in the Fountain) has already won the first Ellis Peters/British Crime Writers award for a historical mystery, and should delight fans of her series. Newcomers, however, might occasionally wish that Falco weren't quite such a thorny character: like the cops on Law and Order, he seems to go out of his way to crack wise and to alienate partners and suspects alike. Working as a tax investigator with Anarcrites, a former chief spy for the emperor Vespasian, Falco calls his new associate ""incompetent, devious and cheap."" Falco's father, an antiquities dealer, is introduced as ""the devious miser Didius Favonius""; his mother and sister are treated with equal scorn. Only Helena Justina, a senator's daughter, gets any respect from the cynical Falco: ""She was neat, scathing, intelligent, wondrously unpredictable. I still could not believe my luck that she had even noticed me, let alone that she lived in my apartment, was the mother of my baby daughter, and had taken charge of my disorganized life."" When he's not bad-mouthing most of Rome's population, Falco follows an increasingly tangled skein of clues to Greece and Tripoli, in search not only of the lion's killer but also of an elusive herb that sounds very much like garlic. As usual, Davis's research into the customs of the period is impeccable: it's only the excessively angst-ridden modernity of her lead character that occasionally rocks the read. (Dec.)
close
Details