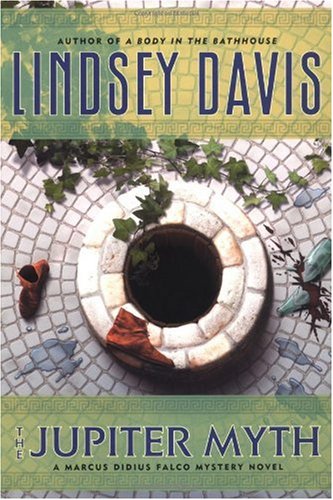 Davis's 14th clever, witty adventure (after 2001's ) starring the suave Marcus Didius Falco, from Ancient Rome, finds the informer/investigator plying his talents on the mean and muddy streets of Londinium, Britannia, in A.D. 75. In fact, almost everything about the growing community is mean, from its dark and dingy bars to the sprawling wharves and warehouses. The discovery of a body jammed headfirst into a bar's well is enough to get Falco sent to the scene as an expert on unnatural death. Falco needs all his celebrated intelligence to survive the ensuing problems. Davis skillfully braids references to Britain's future into her story of its past without ever diminishing the thrust of Falco's adventures. And what adventures! The murder victim is a disgraced henchman of King Togidubnus, an important ally of Rome. Solving and avenging the death quickly is important to placate the king. Civil order is in disrepair, while the rapidly growing city is ripe pickings for the ambitious gangsters moving in from Rome, whom Falco and his friend Petronius, have battled before. An entourage that includes wife Helena, their two small children, his sister, Maia, and her four children gives Falco questionable help. This thoroughly entertaining addition can only burnish the luster of this fine series.