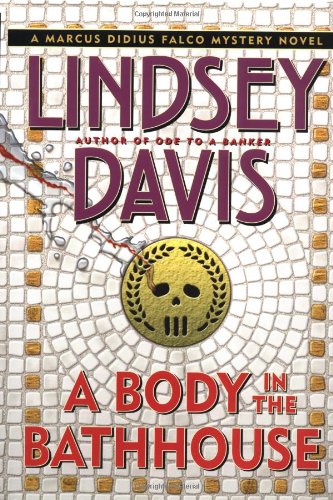 A BODY IN THE BATHHOUSE: A Marcus Didius Falco Mystery

In the 13th of this popular series (, etc., Davis takes her witty and thoroughly likable Roman PI to Britain in 75 A.D. to investigate vast cost overruns at Fishbourne, a huge palace under construction to reward a local chieftain (now king) for aiding imperial legions to conquer his own people. Reluctant to leave the comforts of Rome while his newly widowed sister is being harassed by an unsavory suitor and he is switching houses with his errant father, our hero is browbeaten into the mission by boorish Emperor Vespasian. The whole family Falco journeys across Gaul to Britain's "ghastly terrain... where pasty-faced tribes still had not learned what to do with the sponge on the stick at public latrines." This tongue-in-cheek view of life's challenges nearly 2,000 years ago includes clever dialogue and quick-paced encounters between sophisticated Romans, who "deplore barbarian cruelty—we prefer to invent our own," and sullen locals, especially Great King Togidubnus, who wants to keep his own primitive hut as part of the new palace architecture. Eventually, Falco becomes a target as Romans and Brits fight over everything from women to missing building supplies. In a prolonged and chaotic final chase sequence, Falco and his cohorts run through sleazy brothels and bars searching for culprits responsible for the bodies in the bathhouses, and Davis leaves us laughing at how little life has changed over the millennia.