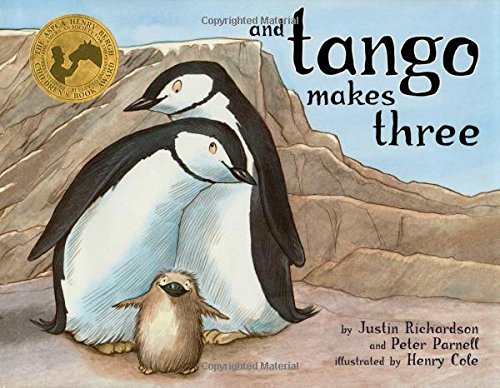 Tango has two daddies in this heartwarming tale, inspired by actual events in New York's Central Park Zoo. Two male penguins, Roy and Silo, "did everything together. They bowed to each other.... They sang to each other. And swam together. Wherever Roy went, Silo went too.... Their keeper... thought to himself, 'They must be in love.' " Cole's ( ) endearing watercolors follow the twosome as they frolic affectionately in several vignettes and then try tirelessly to start a family—first they build a stone nest and then they comically attempt to hatch a rock. Their expressive eyes capture a range of moods within uncluttered, pastel-hued scenes dominated by pale blue. When the keeper discovers an egg that needs tending, he gives it to Roy and Silo, who hatch and raise the female. The keeper says, "We'll call her Tango,... because it takes two to make a Tango." Older readers will most appreciate the humor inherent in her name plus the larger theme of tolerance at work in this touching tale. Richardson and Parnell, making their children's book debut, ease into the theme from the start, mentioning that "families of all kinds" visit the zoo. This tender story can also serve as a gentle jumping-off point for discussions about same-sex partnerships in human society. Ages 4-8.