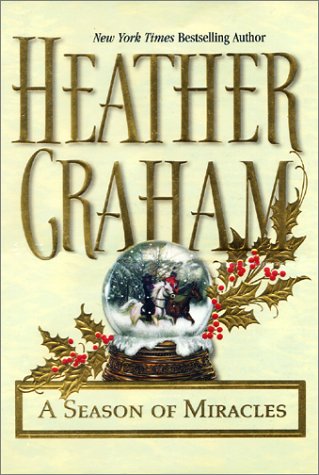 A SEASON OF MIRACLES

A 17th-century romantic tragedy haunts a 20th-century couple in this latest novel by prolific romance writer Graham (). Jewelry designer Jillian Llewellyn works for her grandfather at Llewellyn Enterprises in Manhattan, where her cousins feud for power. Sunny Jillian, her grandfather's favorite, leads a charmed life, but as Halloween approaches, she is disturbed by strange dreams and troubled by the arrival at Llewellyn's of a new manager, darkly handsome Robert Marston. At a Halloween party, both Jillian and Robert are warned by a tarot card reader of impending danger, and told that they were connected in a previous life. Their attraction to each other in this life is plain, and on a Christmas-season company trip to the Llewellyn homestead in Connecticut, they grow closer. In Connecticut, too, Robert is prompted by a helpful ghost to do some research into the 1661 story of a woman burned to death as a witch in England. Do a number of attempts on Jillian's life have anything to do with that long-ago horror? Unfortunately, the 17th-century tale is retold so many times—in the prologue, in the historical account of the times and in two different diary excerpts—that the repetition undermines the plot's punch. The Llewellyn family wrangling functions as an entertaining sideshow, but as the tale builds to a climax, its credibility is weakened by unlikely developments—the number of times Robert saves Jillian from attempts on her life alone borders on the absurd. Narrative flaws aside, diehard fans will relish the cozy Connecticut Christmastime setting.