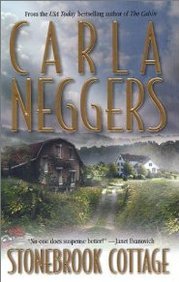 In the hopes of bringing some balance into her hectic life, high-powered defense attorney Kara Galway moves back to her childhood home in Texas after years of living in New England. But fans of Neggers's characteristically chaotic, breakneck-paced romantic suspense novels know that the heroine's hopes will be quashed even before her mentor and friend, Connecticut governor "Big Mike" Parisi, is murdered in his pool. Not long afterwards, Kara's best friend, new governor Allyson, begins receiving sinister crank calls she's concealing, and her two precocious preteens disappear from their Texas summer camp only to reappear, terrified, on Kara's doorstep with a stalker at their heels and a possibly forged note from mom begging Kara to bring them back to the town where they witnessed Mike's death. To do so, Kara illegally, and somewhat illogically, "borrows" her lawman brother's gun and private plane, but readers needn't worry long. Strong, sensitive and seductive Texas Ranger Sam Temple is hot on her trail and ready to come to the rescue. Although Neggers includes a few far-fetched plot turns, her skill at creating colorful characters and deliciously twisted story lines makes this an addictive read.