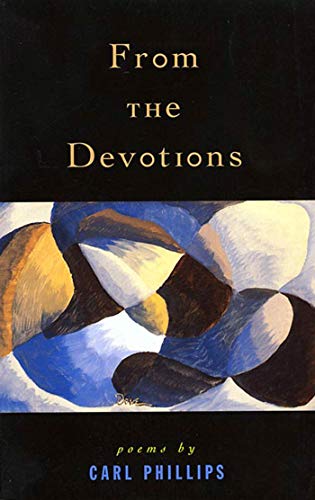 From the Devotions: Poems

In its elegant three-part structure, Phillips's third collection continues his rigorous interrogations of desire and the complications of physical, moral and spiritual connection. Phillips begins with poems of earthly allegiance (engaging animals, domesticity, the natural world) and progresses toward more complex, embattled postures. His background as a classicist informs the clear, spare lines of the poems, but the poet fractures his serene surfaces with gestures of interruption--terse sentences, interjections, disarming enjambments--in the drive toward a deeper precision: ""Tremblefoot,/ mumbler,/ you've left// your glass on the porch railing/ --neglect, as/ what is fragile, seen// through/ but not at this hour empty."" Occasionally the poems rest too righteously on this artifice, their mannered hesitations forced to carry the burden of emotive energy. But more often--particularly in the driven poems of the third section--the tension between physical limitation and spiritual striving, and the desire that blurs their boundaries, come together in extraordinary moments of rapture and lament: ""To steer, on sootless,// drama-less wings those undeeded acres between seduce/ and persuade. O never to get, nor have// got there. To thirst gothically to want--/ like a spire: no discernible object but more sky."" In beginning his book with new ardor, and ending in old, irredeemable loss, Phillips shapes a compelling lyric truth from the partiality of devotion, from the devastating limits of physical and emotional relations and from love: ""for whom is it this way now, when/ I can't, I could not save you?"" (Jan.) FYI: Phillips's last book, Cortege, was a National Book Critics Circle Award and Lambda Literary Award finalist.
close
Details