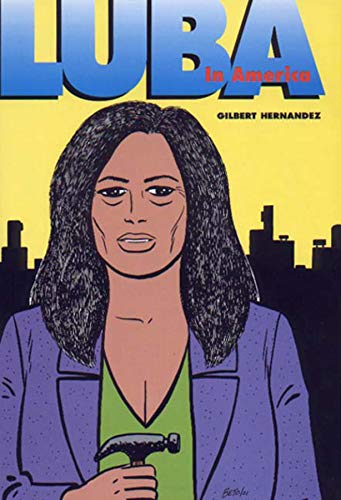 This collection of short comix gathers work by Hernandez, who, along with his brother, Jaime, created Love and Rockets, the ongoing comix series credited with spurring a new era of literary cartooning in the early 1980s. Although titled after Luba, the enigmatic and bosomy matriarch from the mythical Central American village of Palomar, most of the stories are told by Venus, Luba's precocious and endearing young niece. The stories present the tangled lives of Luba, Hernandez's most famous character, and her two equally over-endowed half-sisters: Petra, a sexy lab technician and Venus's mom, and Fritzi, a spicy psychiatrist with an outrageous lisp. Hernandez tells of these iconoclastic characters' rites of passage, infidelities, betrayals, secret pasts and personal flaws. But these satirical, blatantly erotic stories are also marked by Hernandez's engaging representations of female personality, resilience and determination. He has created an episodic saga that lampoons Latino generational epics, Anglo-influenced Latino pop culture and all manner of sexual couplings. At times, the flashbacks can get complicated, and even longtime L&R fans may need to consult Hernandez's strategically placed character guides. His b&w drawings are delightfully cartoonish (influenced by such artists as Milton Caniff and by Archie comics), but also crisply precise and anatomically impeccable. Hernandez's is one of the most engagingly bizarre, sexy and unpredictably funny comics soap operas readers are likely to encounter.