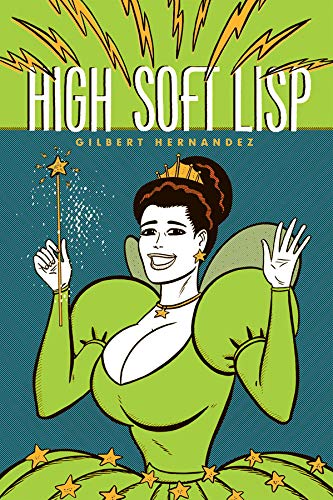 From the pages of the venerable comics institution Love and Rockets come 11 stories that loosely revolve around the emotional and sexual misadventures of psychoanalyst, sci-fi fanatic, and heroically voluptuous grade-Z film star Rosalba “Fritz” Martinez. Originally a minor character in Hernandez's expansive Palomar universe, Fritz doesn't exactly take center stage in her own book, either. In fact, we're introduced to our ostensible heroine as merely the fourth of world-famous motivational speaker Mark Herrera's six wives. The ensuing leaps in chronology and POV can be jarring for those not familiar with Hernandez's episodic style (not to mention the daunting mythology built up over 25-plus years of ), but the stories' offbeat humor and manic sexual energy make the adjustment more than worthwhile. Fritz's hypersexuality, bizarre fetishes, rampant vanity, and burgeoning alcoholism provide many of the volume's finest comic moments, but the ample sex on view is rarely sexy. Rather, the characters' libidinous pursuits are tied into an affecting strain of loneliness and regret that pervades even the most outlandish panels. Add to that Hernandez's characteristically thick, expressive line and character design that owes an acknowledged debt to Archie comics, and the result is a charmingly incongruous, occasionally titillating collision of poignancy and pulp.