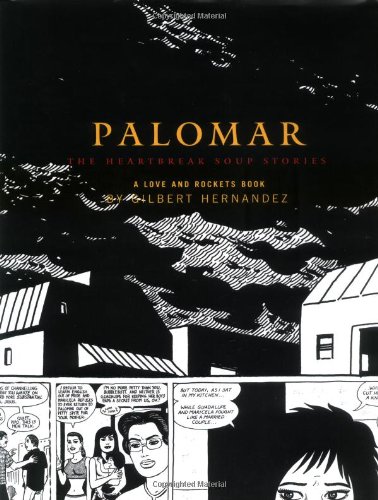 In 1983, Hernandez started writing and drawing short stories in about a little central American town called Palomar and the interconnected lives of its inhabitants. The "Heartbreak Soup" stories, as they were called, established his reputation, and this mammoth, hugely compelling book collects the first 13 years' worth of them. The earliest stories in the book owe more to magical realism and Gabriel García Marquez than to anything that had been done in comics before. But in later pieces, like the harrowing "Human Diastrophism" and "Luba Conquers the World," Hernandez's style is entirely his own: brutally telegraphic (he can capture an entire emotionally complex scene in a single panel, then imply even more by abruptly cutting to the middle of a later scene), loaded with insight about the bumpy terrain of familial and sexual relationships, swinging wildly in tone between suffocating darkness and sunny charm. His characters have enormous, tangled family trees, and he gradually unfolds their histories: there are some plot developments he sets up a decade or more in advance. And for all the bold roughness of his drawing style, Hernandez is a master of facial expression and body language. He tracks dozens of characters across decades of their lives, and their ages and their distant family resemblances are instantly recognizable, as are their all too human dreams and failings. This is a superb introduction to the work of an extraordinary, eccentric and very literary cartoonist.