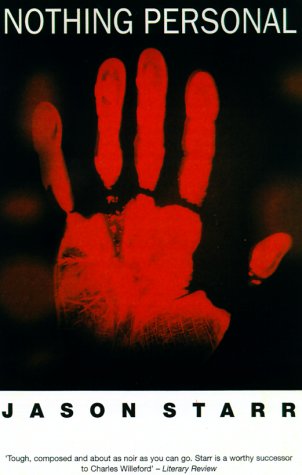 Noir devotee Starr's jet-black kidnapping/extortion thriller has attitude to spare. Too bad it doesn't have wit and style to match: his all-too-familiar venture into James M. Cain territory is populated by a cast of paper-thin, exceedingly unpleasant characters, all of whom quickly outstay their welcome. Davis Sussman is an arrogant, control-freak advertising executive, who finds himself in a tricky position when his temperamental mistress, Amy Lee, decides that she's tired of being his plaything. Joey DePino is a down-on-his-luck cable installer with compulsive gambling habits and a fast-deteriorating marriage. David's wife, Leslie, is best friends with Joey's wife, Maureen, and faster than you can say ""plot contrivance,"" desperately-in-debt Joey has hatched a plan to kidnap the Sussmans' beloved daughter, Jessica, and hold her for $30,000 ransom. There are, of course, myriad complications. Joey injudiciously picks a brain-damaged sex maniac, who goes by the colorful sobriquet ""Billy Balls,"" to be his partner-in-crime, while David finds himself being blackmailed by a vengeful (and markedly unhinged) Amy. In the hands of a master of tongue-in-cheek edge, like Elmore Leonard, or an expert practitioner of the down-and-dirty melodrama, like Donald Westlake's alter ego Richard Stark, this premise could provide the foundation for a sharp, caustically funny sendup of marriage, adultery and obsessive behavior. Unfortunately, Starr's approach is much more run-of-the-mill. His dialogue is flat and listless, lacking the necessary staccato, noirish bite; his plotting is mundane and his observations (""Maureen's insecurity was something Leslie could always count on. No matter how bad things got in Leslie's life, Maureen was always a step lower"") are uninspired to the point of banality. Although it moves along smoothly and just manages to retain the reader's interest throughout, Starr's novel proves to be a decidedly low-wattage thriller. Film rights to Spice Factory. (May)
close
Details