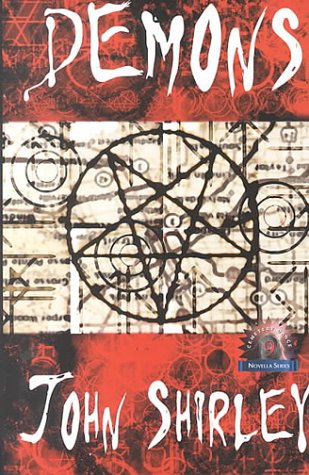 Horror fiction that traffics in the supernatural perforce sometimes deals with matters of psycho-spiritual import. Rarely does it tackle them as directly as in this exciting, vigorously original novella from Shirley (Black Butterflies, etc.). The book is brief, but Shirley packs into it an epic's worth of imagination and ideas. As the story opens, Earth is under siege by marauding demonsDseven ""Clans"" or types of ""supernatural creatures"" that take pleasure in killing, often with maximum pain. In flashback, the narrator, Ira, a young artist/art director, details the coming of the demons and humanity's response to their mass slaughterDdenial, terror, appeasement, habituation; in the present day, he helps uncover the decades of intentional human depredation that led to their arrival. At this level, the novella works well as a brisk, sophisticated action yarn with echos of classic horror tales, particularly those dealing with alien invasion; especially effective is a rooftop scene that has Ira facing off against a Bugsy, an extremely nasty sort of demon that mimics human form and talks like a drunk. But Shirley ups the ante considerably by doubling the story as a parable about awakening, as Buddha, Jesus and others might have used the termDabout awakening from the mind's incessant chatter and dreams to see the world as it really is. Humanity's hope to defeat the demons rests in a mysterious Conscious Circle of Humanity made up of those who have achieved wakefulness; one man connected to the Circle has an exotic daughter whom Ira loves and who turns out to be harboring within her psyche the ""Gold in the Urn,"" a blazing wheel of energy that contains the ""being force"" of history's awakened ones and that, ultimately, proves the demons' match. With its potent underlying philosophy, serious theme, fresh vision and taut storytelling, this little novel makes a big impact. (Aug.)
close
Details