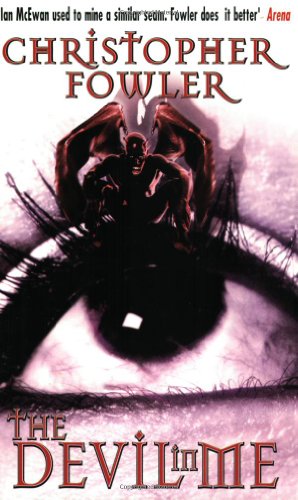 THE DEVIL IN ME

Although Fowler is best known as the author of , the collections and other exercises in urban horror, this new compilation shows the darkness of those works to be but one tone in his colorfully varied palette. To be sure, the book features solid chillers that rank with the best of his horror writing. "At Home in the Pubs of Old London" is a disarmingly oblique tale of psychopathology related as a nostalgic travelogue of London watering holes. "The Look" translates the outrageous demands of fashion modeling into a blend of physical horror and social satire. In most of the 12 selections, though, Fowler uses the wit and black comedy typical of his bleaker fiction to sculpt moods ranging from the subtle suspense of "Living Proof" to the giddy whimsy of "Something for Your Monkey," a delightful account of professional celebrity handlers whose clients are public relations nightmares. While some of the stories are so low-key as to be anticlimactic, all benefit from their author's keen eye for illuminating details of character and place. In "Rainy Day Boys," his Londoners "look dirty and depressed, as though they'd been deserted by their gods and left to die." The poignant character study "The Beacon" uses its remote Cornish setting expertly to focus the detachment and alienation of an aging protagonist struggling to demystify the intricacies of his befuddling new personal computer. These eclectic, well-crafted efforts could break Fowler out to the broader audience he has long deserved.