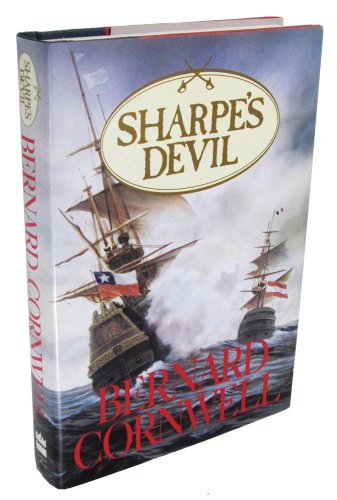 Fans of the 10 previous Sharpe novels will be delighted to have the up-from-the-ranks ex-colonel back. Five years after Waterloo ( Sharpe's Revenge ), Sharpe, living quietly en famille in Normandy, is asked by Dona Louisa Vivar to find her husband, last seen as a Spanish captain-general in rebellious Chile. En route to South America, Sharpe can't resist stopping at St. Helena to meet Napoleon, who charms Sharpe and his ex-sergeant, Patrick Harper, then asks them to carry a gift to an English settler in Chile. When they arrive, they are told Vivar is dead, and the corrupt man serving in his place accuses them of trying to pass a message from Napoleon to Chilean insurgents. Sharpe and Harper are shipped out on a Spanish frigate, which is captured by rebels led by the eponymous devil, Scottish Lord Cochrane, formerly of the Royal Navy, still the legendary scourge of the Spanish fleet. The ebullient, daring Cochrane sweeps Sharpe along in a series of breathtaking adventures on land and sea that ends with a smashing, against-the-odds rebel victory and the solution to Vivar's disappearance. Readers will be dazzled by the rollicking plot, period color and the atavistic thrill of terrific battle scenes right out of a Turner painting. (June)
close
Details