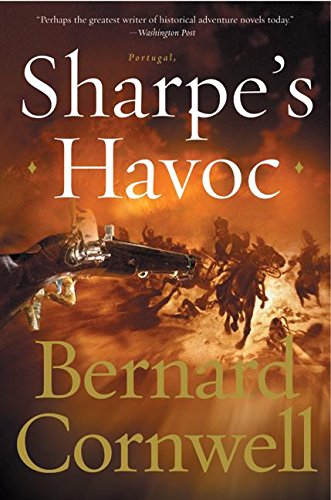 Sharpe fans who may have worried that Cornwell's popular series was drawing to a close can heave a sigh of relief—the 19th entry (after 2002's ) brings the up-from-the-ranks rifleman back to the Peninsular War where the series began, among such familiar comrades-in-arms as Sergeant Harper and the "old poacher" Dan Hagman. In the treacherous villain role without which no Sharpe adventure would be complete, the Shakespeare-quoting Colonel Christopher plays both sides of the fence in an effort to contrive a peace between the warring parties that will leave him a rich man. But Christopher hasn't reckoned with the new British commander, Sir Arthur Wellesley, the future Duke of Wellington, who arrives in time to catch Marshal Soult's invading army by surprise. Meanwhile, Sharpe and his men, cut off in a Portuguese village, hold off superior French forces with the aid of Lieutenant Vicente, a Portuguese lawyer, poet and philosopher turned soldier. Sharpe's antilawyer barbs, as well as some later banter about the troubled relations between the English and Irish and between the Spanish and Portuguese, provide comic relief, while Kate Savage, a naïve 19-year-old Englishwoman seduced by Christopher, lends relatively minor romantic interest. A delicious scene at Wellesley's headquarters, in which Sharpe has to account for his seemingly inactive role, will please aficionados, as will the ringing words with which Cornwell closes his customary afterword on the historical background: "So Sharpe and Harper will march again."