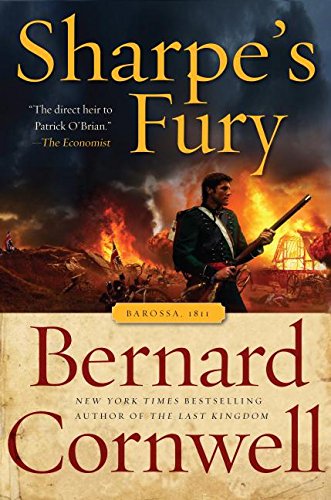 Sharpe's Fury: Richard Sharpe and the Battle of Barrosa, March 1811

Capt. Richard Sharpe, upstart rifleman, performs a sensitive mission for Henry Wellesley, the duke of Wellington's younger brother and special envoy to Spain in Cadiz, in bestseller Cornwell's rousing 21st military historical (after 2005's ). A secret cabal of Spaniards who favor a rapprochement with France threatens the alliance between England and Spain in the fight against Bonaparte. The conspirators, who include a murderous priest, Fr. Salvador Montseny, have stolen some unfortunate love letters Wellesley wrote to his prostitute amour, Caterina Blazquez, and plan to use them to embarrass the British. It's up to Sharpe to recover the letters and save the alliance. Meanwhile, British troops, with little help from the Spanish army, maneuver to lift the French siege of Cadiz. As usual, Sharpe must contend with a snobbish superior officer, Brigadier Moon, who gets his just reward in a delicious surprise twist at battle's end. One hopes the nasty Father Montseny, who disappears from the action too soon, will return to bedevil Sharpe in future installments.