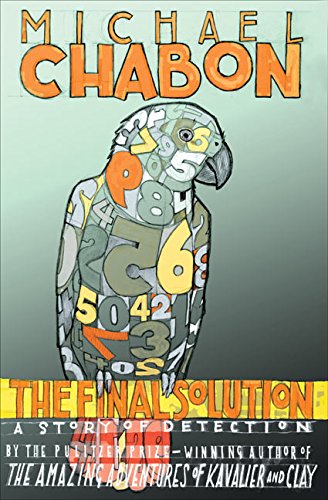 THE FINAL SOLUTION: A Story of Detection

Initially published in the in 2003, Chabon's first significant adult fiction since his Pulitzer-winning (2000) continues his sophisticated, if here somewhat skewed, appropriation of pop artifacts—in this case one of the greatest pop artifacts of all, Sherlock Holmes. As fans of the great detective know, after retirement Holmes moved from London to Sussex, where he spent his days keeping bees. Chabon's story takes place during WWII, when Holmes is 89 and intent on bee-keeping only—until a mysterious boy wanders into town. The boy is remarkable for two reasons: he's clearly intelligent but is mute, and he keeps a parrot that mouths, among other utterances, numbers in German. When the parrot is stolen, local cops turn to Holmes, and he's intrigued enough to dust off his magnifying glass and go to work. The writing here is taut and polished, and Chabon's characters and depictions of English country life are spot on. It's notable, though, that Chabon refers to Holmes never by name but persistently as "the old man"—notable because it's difficult to discern a reason other than self-conscious artistry not to name Holmes; the scenes in the novel that grip the strongest are those that feature Holmes, and more credit is due to Conan Doyle than to Chabon for that. Neither a proper mystery nor particularly fine literature, this haunting novella, for all its strengths, lies uneasily between the two and will fully please few fans of each.