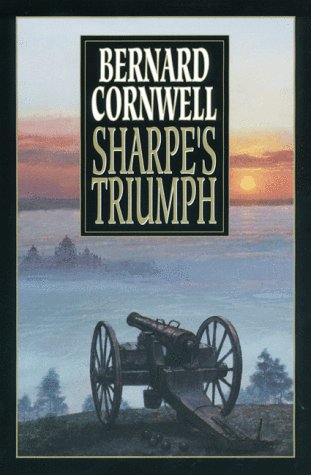 Sharpe's Triumph: Richard Sharpe and the Battle of Assaye, September 1803

Followers of Cornwell's series featuring the exploits of British infantry officer Richard Sharpe (Sharpe's Rifles, et al.) in the Napoleonic wars (adapted for Masterpiece Theater) and in his earlier career in colonial India will relish this look at Sergeant Sharpe on the subcontinent in 1803. A fluke makes our hero unofficial aide to General Sir Arthur Wellesley (the future Duke of Wellington, though it's never mentioned in the novel) at the time of the siege of Ahmednuggur and Wellesley's brilliant victory at Assaye against the Indian Mahratta Confederation and the turncoat forces of ex-English officer William Dodd. This was the beginning of the end of the Mahratta rebellion against the British and a turning point in the Raj's growing power. Among the book's rich cast of characters are Hakeswill, a murderous British sergeant determined to kill Sharpe; Simone Joubert, the needy wife of a French officer; and the colorful Hanoverian mercenary, Colonel Pohlmann, who leads the Mahratta forces from atop an elephant. Most roundly dimensional and representing the extremes of British society are Wellesley, the coldly brilliant and fearless son of an earl, and Sharpe himself, the tortured, unlettered bastard from London's slums, who is determined to rise. Cornwell contributes vivid details in descriptions of life in an army camp, the dual military regimes of the East India Company and the regular army, and Indian politics. Best are the battle scenes, laid out clearly--there's a handy map--with all the heat, stink and blood of war and ""the joys of slaughter."" The reader's pleasure in all this gore may be a guilty one, but Cornwell, a master of battlefield writing, makes it too exhilarating to forgo. 15-city NPR feature; 3-city author tour. (Aug.)
close
Details