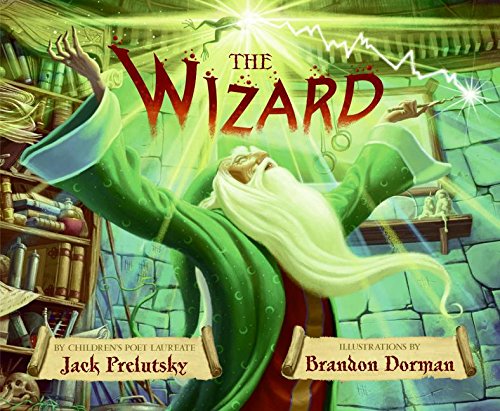 On a seemingly normal suburban cul-de-sac, one house is definitely out of character—the looming tower that’s home to the title character. Dressed in a green robe and peaked hat decorated with stars and moons, “He’s tall and thin with wrinkled skin,” writes Prelutsky, “a tangled beard hangs from his chin.” (The verse originally appeared in the 1976 collection .) As he “ponders in his wicked way/ what evil deed he’ll do this day,” the wizard decides to gives his powers a workout on a hapless frog. The poor amphibian is transformed into a flea, a pair of mice, a cockatoo, a piece of chalk and silver bell before being returned to his original shape. Mightily pleased with himself, the wizard gazes down upon the children playing in the street below and debates his next move: “He may pluck someone off the spot/ and turn him into... who knows what?” The poem isn’t one of Prelutsky’s most memorable works, but it is pretext enough for an impressive picture book by Dorman. The illustrator’s digital artwork has all the burnished lushness and radiance of oil paintings. Whether immersing readers in the delicious gloominess of the wizard’s workroom or zooming in for a close-up of the enchanter’s knobby fingers and menacing nails, Dorman proves his mettle as a marvelous visual storyteller. Ages 5-10.