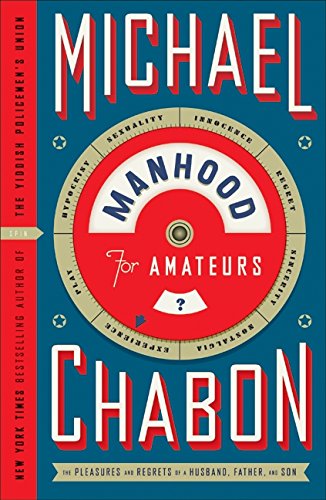 Manhood for Amateurs: The Pleasures and Regrets of a Husband, Father, and Son

An entertaining omnibus of opinionated essays previously published mostly in magazine spotlights novelist Chabon's ( ) model of being an attentive, honest father and a fairly observant Jew. Living in Berkeley, Calif., raising four children with his wife, Ayelet Waldman, who has also just published a collection of parenting stories ( ), Chabon, at 45, revisits his own years growing up in the 1970s with a mixture of rue and relief. A child of the suburbs of Maryland and elsewhere, where children could still play in what he calls in one essay the “Wilderness of Childhood,” he enjoyed a freedom now lost to kids, endured the divorce of his parents, smoked a lot of pot, suffered a short early marriage and finally found his life's partner, who takes risks where he won't. The essays are tidily arranged around themes of manly affection (his first father-in-law, his younger brother); “styles of manhood,” such as faking at being a handyman; and “patterns of early enchantment,” such as his delight in comic books, sci-fi and stargazing. Candid, warm and humorous, Chabon's essays display his habitual attention to craft.