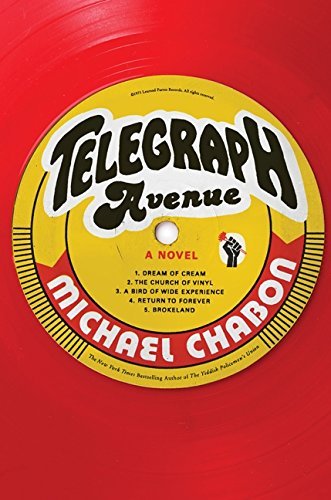 Virtuosity” is the word most commonly associated with Chabon, and if Telegraph Avenue, the latest from the Pulitzer Prize–winning author of The Yiddish Policeman’s Union, is at first glance less conceptual than its predecessors, the sentences are no less remarkable. Set during the Bush/Kerry election, in Chabon’s home of Berkeley, Calif., it follows the flagging fortunes of Brokeland Records, a vintage record store on the titular block run by Archy Stallings and Nat Jaffe, currently threatened with closure by Pittsburgh Steeler’s quarterback-turned-entrepreneur Gibson “G Bad” Goode’s plans to “restore, at a stroke, the commercial heart of a black neighborhood” with one of his Dogpile “Thang” emporiums. The community mobilizes and confronts this challenge to the relative racial harmony enjoyed by the white Jaffe; his gay Tarantino-enthusiast son, Julie; and the African-American Archy, whose partner, Gwen Shanks, is not only pregnant but finds the midwife business she runs with Aviva, Jaffe’s wife, in legal trouble following a botched delivery. Making matters worse is Stallings’s father, Luther, a faded blaxploitation movie star with a Black Panther past, and the appearance of Titus, the son Archy didn’t know he had. All the elements of a socially progressive contemporary novel are in place, but Chabon’s preference for retro—the reader is seldom a page away from a reference to Marvel comics, kung fu movies, or a coveted piece of ’70s vinyl—quickly wears out its welcome. Worse, Chabon’s approach to race is surprisingly short on nuance and marred by a goofy cameo from a certain charismatic senator from Illinois. 15-city author tour. Agent: Mary Evans. (Sept. 11)
close
Details