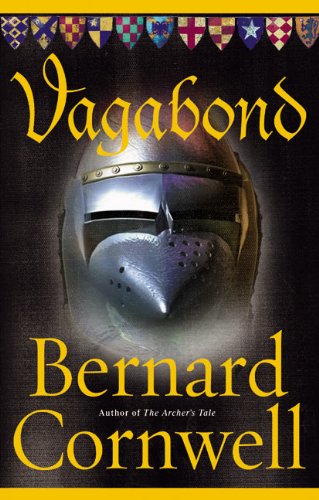 The Hundred Years War is the bloody backdrop to this second volume of Cornwell's new series about the search for the Holy Grail (after ). Like its predecessor, the novel follows Thomas of Hookton, an archer in the English army in the 14th century. Thomas is the bastard son of a recently murdered priest whose family claims it once possessed the Holy Grail. No one is certain the Holy Grail actually exists, but many believe it does, and kings are waging war and committing murder in the search for it. Thomas has a book of his father's, written in Latin and Hebrew, which might reveal clues to the Grail's location, if only he could make head or tails of it. But others are aware of the book's existence, and Thomas's motley enemies and rivals—including Guy Vexille, the French cousin who murdered his father; Bernard de Taillebourg, a Dominican Inquisitor who loves his job; and Sir Geoffrey Carr, a treacherous English knight—are all hot on his trail. The beleaguered young hero must also fight mercenaries, Scots and Frenchmen in gruesome, long-drawn-out battles. Cornwell is meticulous about historical facts and period detail, and his descriptions of butchery with arrow, mace and battleaxe are nothing if not convincing. As expected, the book culminates with battlefield slaughter on an epic scale. Cornwell fans will eat this up.