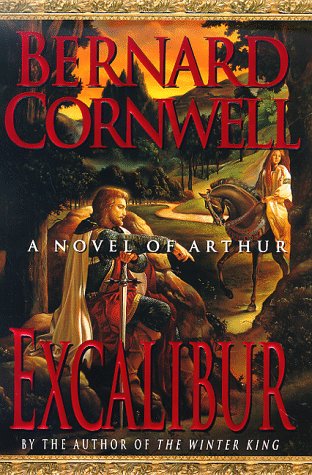 Readers of Mallory and other sources of Arthurian lore may be struck by their conflation of bloody savagery and Christian pieties. In his new Arthurian novel, Cornwell (The Winter King) dramatizes the confrontation of Christianity--here depicted as the political tool of self-righteous brutes, opportunists and hypocrites--with the old religion of the Druids. Chief among the Druids are Merlin and his nemesis, Nimue, who cast spells and preside over rituals of fire and human sacrifice in order to bring about a return of the old gods, saving Britain from the Saxons. Priestess Nimue wants to sacrifice Arthur's son Gwydre to this end, but Merlin resists, as do Arthur and his warrior friend Derfel: for this they suffer terribly. The tale is told by Derfel, now an old monk in the service of an illiterate and sadistic bishop who would punish Derfel if he knew what he were writing. This frame works well to flavor and deepen the whole. The book is a military tale--alliances, strategies, battles, betrayals--and is stirringly told as Arthur routs the treacherous Lancelot and his Saxon backers. It is also the tale of the reconciliation of Arthur, honest to a fault and tortured by his wife's betrayal, with Guinevere, extraordinary in her bravery, wisdom and forthrightness. Equally central is Derfel's devotion to his mate, Ceinwyn, for whose life he sacrifices his shield hand, averting Nimue's curse. The action is gripping and skillfully paced, cadenced by passages in which the characters reveal themselves in conversation and thought, convincingly evoking the spirit of the time. Ways of ancient ritual, battle and daily life are laid out in surprising detail. One feels the element of fantasy only in the incredible integrity of Derfel and Arthur, men who sacrifice all for a vow--but our reluctance to believe may be only a sign of our times. (July)
close
Details