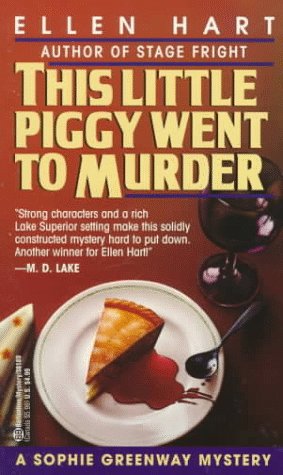 This Little Piggy Went to Murder

Hart, whose previous mysteries starred restaurateur Jane Lawless (Stage Fright), introduces a new heroine, food critic and amateur sleuth Sophie Greenway. Don't expect much in the way of recipes, restaurants or food, however, since the job serves mainly as an excuse for Sophie's presence on the scene. When an old friend, Amanda Jorensen, remodels her family restaurant, Sophie travels to Duluth, Minn., with her husband, Bram, to cover the grand reopening. The day before, a man has been found hanging from Duluth's Aerial Lift Bridge, and Amanda's father is shot to death soon afterward. A few days later, a third person is poisoned at a Labor Day fund-raiser for Amanda's politician brother. The killer leaves behind verses from the nursery rhyme ``This Little Piggy Went to Market,'' and it soon becomes obvious that the murderer must be a member of Amanda's family. Though Hart has given her characters distinct and detailed backgrounds, they never quite come alive, and a point-of-view switch whenever the killer is about to strike is annoying. The reason behind the nursery rhyme, other than to provide a catchy title for the book, is also never fully explained. Still, there are some good, nail-bitingly tense scenes and lots of red herrings, and Hart manages to resolve things nicely. (Dec.)
close
Details