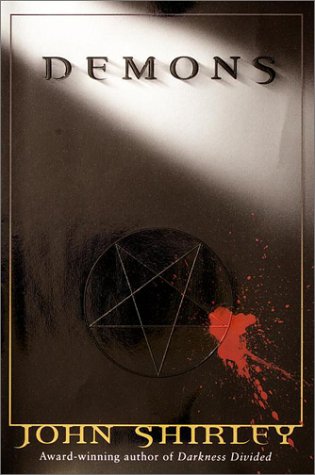 To a novella of the same title, Shirley () adds a lengthy aftermath that, though it couples clunkily, offers a crafty elaboration of the dark metaphysics in the original parable about corporate greed. Nine years after the benevolent Conscious Circle group exorcised the ravenous demons who arose in response to toxic disaster, it's business as usual in America. Stephen Isquerat, a naïf climbing the corporate ladder at the West Wind company, is convinced like most everyone else that the past demonic convergence was a hallucinogen-induced exercise in mass hysteria. Little does he know that his company's interest in "psychonomics," the manipulation of the spiritual power of business, is laying the foundation for a demon resurrection, or that his work marketing Dirvane 17, a potent neurotoxic pesticide, is making him the perfect vessel for their second coming. The first part of the novel is a fascinating if talky take on clinical demonology that greases the wheels for escalating events in the second part. Though the author conceived the two halves of his story as variations on the same theme, their differing approaches seem out of synch, a problem most notable in the perfunctory relationship of Conscious Circle members to Stephen's experiences. For all the narrative gear grinding, Shirley succeeds in fashioning an over-the-top occult thriller solidly anchored in a bedrock of social consciousness.