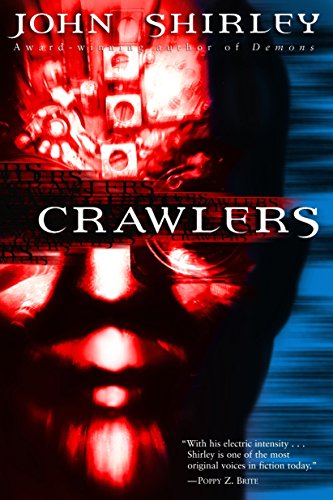 In Shirley's frightening new novel, he extends the smart work he did in (2002), investing a fierce genre tale with spiritual import. Here Shirley reaches back to the classic pulp scenario of a small town beset by an alien invasion. In this case, though the townspeople of Quiebra, Calif., initially assume that the capsule that crashes originated in space, it's actually a satellite put into orbit by a hush-hush military research outfit fearful of the out-of-control nanotechnology experiment it contains. The experiment involves nanoparticles that have evolved into a kind of group mind (as in Michael Crichton's ), taking over human (and animal) hosts and, by incorporating pieces of hardware, refashioning those hosts into an amalgam of human and machine ("Deputy Sprague's neck was gone, replaced with a metal stalk..."). Humans differ as to their vulnerability to takeover, with some adults more resistant than others, and younger people quite resistant; this allows Shirley to use teenagers—a likely readership for the book—as the novel's heroes, and his understanding of teen ways and patterns of speech is deep and exact. This tack also allows for some profound emotion, as kids—particularly Adair and Waylon Leverton, whose father is the first person taken over in Quiebra—witness the soul-destruction and/or death of their parents. The novel's depiction of humans devolving into group-mind–controlled machines proves an excellent metaphor for Shirley's take here on the human condition, which posits that some of us are already machinelike and others more "awake"; but the narrative does slide slightly into didacticism as it elaborates these understandings. Overall, though, this is an exciting novel of ideas wrapped in red-hot pulp