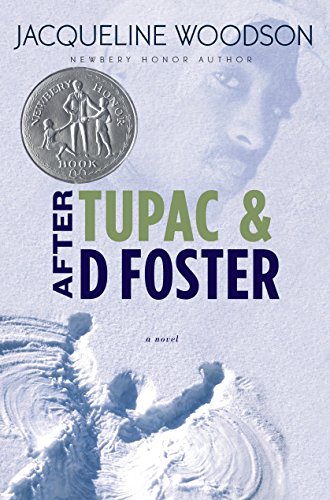 After Tupac and D Foster

As she did in with the poetry of Emily Dickinson, Woodson here invokes the music of the late rapper Tupac Shakur, whose songs address the inequalities confronting many African-Americans. In 1994, the anonymous narrator is 11, and Tupac has been shot. Everyone in her safe Queens neighborhood is listening to his music and talking about him, even though the world he sings about seems remote to her. Meanwhile D, a foster child, meets the narrator and her best friend, Neeka, while roaming around the city by herself (“She’s like from another planet. The Planet of the Free,” Neeka later remarks). They become close, calling themselves Three the Hard Way, and Tupac’s music becomes a soundtrack for the two years they spend together. Early on, when Tupac sings, ''Brenda’s Got a Baby,’’ about a girl putting her baby in a trash can, D explains, ''He sings about the things that I’m living,’’ and Neeka and the narrator become aware of all the ''stuff we ain’t gonna know [about D],’’ who never does tell them where she lives or who her mother is. The story ends in 1996 with Tupac’s untimely death and the reappearance of D’s mother, who takes D with her, out of roaming range. Woodson delicately unfolds issues about race and less obvious forms of oppression as the narrator becomes aware of them; occasionally, the plot feels manipulated toward that purpose. Even so, the subtlety and depth with which the author conveys the girls’ relationships lend this novel exceptional vividness and staying power. Ages 12-up.