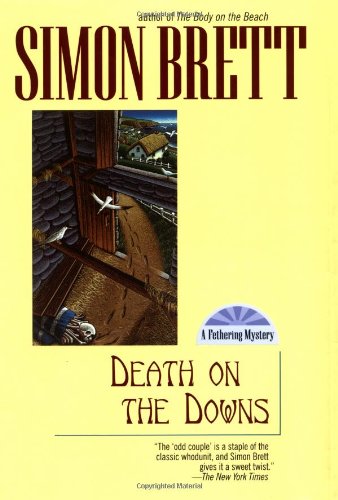 DEATH ON THE DOWNS: A Fethering Mystery

Carole Seddon, newest of veteran Brett's three series sleuths (actor Charlie Paris and widow Emily Pargeter are the others) gets a second turn following her debut in . Seddon, an early Home Office retiree, prides herself on her sensible approach to life—a snug place in Fethering, a routine that involves mental exercises like the crossword puzzles and long walks along beaches or out on the Downs. On a walk on the South Downs near Weldisham (a village that "looked from the outside as though it hadn't changed much since the days when Agatha Christie might have set a murder there"), a driving rain forces Carole to seek shelter in an abandoned barn, where she discovers a bag of human bones. The local police are informed, and rumors spread to the effect that the bones might have belonged to a missing young woman named Tamsin. Soon Carole and her somewhat mysterious and exotic friend Jude are busily involved in sussing out information on their own—partly for adventure, and partly because Tamsin had once turned to Jude for help. Carole's lack of self-confidence, really a lack of self-awareness, is meant to be endearing, but becomes irksome at times. All in all, Brett's more than competent plotting, a cast of characters that play against type to keep things sufficiently interesting and his take on village gentrification combine for fine entertainment. The author's core fans and those nostalgic for the traditional English cozy will snap this up.