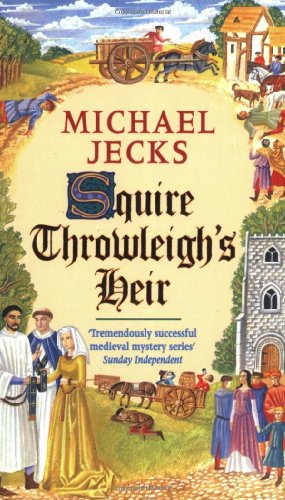 The brutality of medieval life underpins Jecks's seventh mystery in this worthy series featuring Sir Baldwin of Furnshill, keeper of the king's peace and noted investigator of violent crimes. During the troubled reign of the decadent Edward II, Squire Roger of Throwleigh realizes that any day might be his last as the pain around his heart worsens. Worried about the fate of his young son and heir, Herbert, he takes some consolation in knowing that his capable wife, Katharine, will protect the lad. Alas, just days after Roger falls dead from his horse while arguing with a luckless tenant he's about to evict, a cart driver runs over Herbert in a seeming accident. Sir Baldwin, who has attended Roger's funeral, smells foul play. Against Katharine's protests, he examines Herbert's body--and sure enough, the boy's skull shows signs of having been crushed by a heavy object. The many suspects include Edmund, the tenant facing eviction; Thomas of Exeter, Roger's merchant brother, who's the next heir; Sir James van Relenghes, an arrogant Flemish mercenary with designs on the bereft Katharine; and the effeminate Brother Stephen of York, Herbert's tutor, who has a taste for thrashing small boys. Various servants, each with his or her own devious ends, thicken the plot. Jecks does his usual skillful job of building suspense and teasing the reader with first one then another possible murderer until, playing against stereotype and conventional expectations, he reveals the unlikely culprits. (May)
close
Details