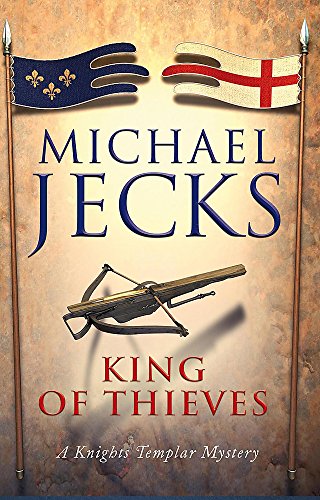 The King of Thieves: A Knights Templar Mystery

Fans of well-researched historicals will welcome Jecks’s 26th Knights Templar mystery (after 2008’s ). In 1325, England’s Edward II prepares to pay homage to the French king, Charles IV, in order to retain two precious territories in France. At the last minute, Edward decides to send his willful and untested teenage son in his place, with orders to Sir Baldwin de Furnshill and Baldwin’s longtime friend, Simon Puttock, to watch over his son on the journey. In Paris, Queen Isabella, Charles’s sister and Edward’s wife, is trying to keep the peace, though she bitterly resents her husband’s relationship with his intimate adviser, Sir Hugh le Despenser. Meanwhile, the Procureur of Paris, Jean de Poissy, has two murders to investigate—that of a man who was on a mysterious visit to the Louvre palace, and that of a naked woman found near the palace. Frequent scene shifts help move the complex, multilayered plot.