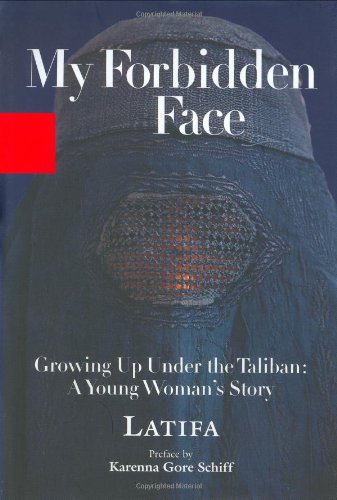 MY FORBIDDEN FACE: Growing Up Under the Taliban: A Young Woman's Story

Readers who want to know what life was really like when the Taliban ruled Kabul should turn off CNN and read this book. Latifa (who writes under a pseudonym) was a 16-year-old aspiring journalist when her brother rushed home one day in late 1996 with word that the white flag of the Taliban flew over their school and mosque. She writes, "We knew the Taliban were not far away... but no one truly believed they would manage to enter Kabul." The bizarre edicts of the women-suppressing regime slowly become a reality: women weren't allowed outside the home unless they were shrouded in a "chadri" (which covers the face and arms, unlike a burka, which covers the entire body and—according to Latifa—is worn only in distant provinces) and accompanied by a male relative. "A girl is not allowed to converse with a young man. Infraction of this law will lead to the immediate marriage of the offenders." No wearing of bright colors or lipstick; no medical care from a male doctor. And women doctors were not allowed to work, essentially cutting off medical care for women. Latifa's story puts a face on these now-familiar rules, and conveys the sheer boredom of the lively teenager-turned-hermit and the desperation of not knowing if she'll ever complete her education in such an upside-down world. Despite its rushed ending (the family fled to France in May 2001 with the help of French ) and the occasional reminder that the author is now only 22 (there's talk of Madonna, Brooke Shields, fashion and Indian films), this memoir is one instance where a thousand words are worth more than any picture.