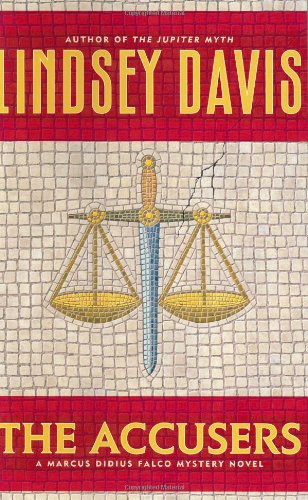 Fans of "informer" Marcus Didius Falco will be glad to find the classical world's answer to the modern-day gumshoe back in Rome in Davis's stellar historical, the 15th entry in this witty and learned series, after two adventures set in Britain ( ; ). In an effort to resume his career as an informer on his home turf, Falco ends up playing advocate in a messy dispute that pits him against two highly successful "legals," Paccius Africanus and Silius Italicus. The convoluted case, which involves a wealthy, fractious family and tricky questions of inheritance, gives Davis the opportunity to explore the vagaries of Roman law, which she approaches with her usual mix of respect and sarcasm. The corruption conviction of senator Rubirius Metellus followed by his mysterious demise threaten the Metelli family's fortunes. Hired to prove the senator's death was not a suicide, Falco finds himself immersed in scandal, blackmail, corruption and intrigue—common ingredients of legal practice. In one particularly fine scene, Falco delivers a speech in the Basilica that relies on amusing and effective rhetorical tricks. Wry, cynical and principled, Falco makes the perfect guide to Davis's vividly realized ancient Rome.