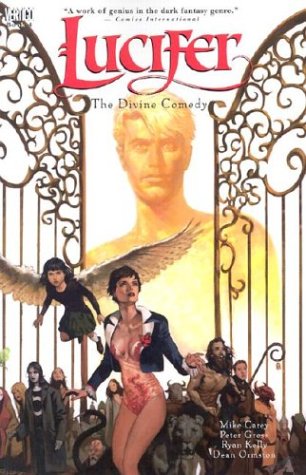 Lucifer Morningstar is a fallen angel of Heaven, who ruled Hell for a time, then left for Earth before growing disenchanted with his time there. He later created his own realm and universe to have a place where his beliefs about life and the afterlife could be realized. He's populating his land with lost souls, and anyone who settles in his land is free to live as he or she chooses, his only mandate that they must worship no one. The forces of Heaven view Lucifer's universe as an atrocity against God and insist the domain must be closed at any and all costs. In this compendium of issues 21–28 of the Eisner Award–nominated series, the Archangel Michael finds himself torn between his service to God and his service to his brother Lucifer. Lucifer's new land isn't as "heavenly" as he may envision it, though, and several non-heavenly forces are at work against him. A group of demons have planted their seed in a woman and plan to use their offspring for their own diabolical needs. Will the story end when Lucifer is slain, or can a being such as this fallen angel defeat Death and get yet another chance? Although writer Carey weaves an unusual story with an original take on the forces of good, evil and beyond evil, the art (by Gross, Ormston and Kelly) lacks detail and is often simplistic. But the group doesn't go overboard in background details, nor do they spare the gore and monsters.