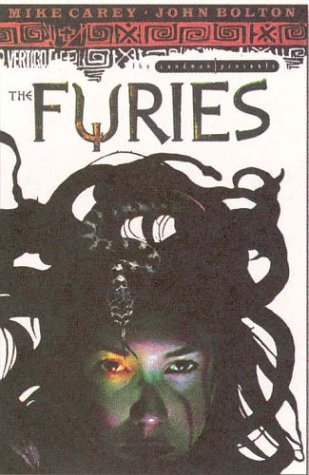 THE SANDMAN PRESENTS: The Furies

If there's an heir to the comics writing tradition of Neil Gaiman's , it's Carey, who currently writes the spinoff series and peppers his stories with Gaiman's brand of clever, learned theology. This tale is a sequel to Gaiman's book (Both titles, in fact, refer to the Eumenides from Greek mythology.) Those who haven't read Gaiman's book will likely be baffled by a few significant plot twists in this one. Lyta Hall, a former superheroine (and half-Fury) whose life has been shattered by the loss of her infant son, gets involved with an American theater group in Athens at the same time as the Greek gods decide to use her as a pawn in their internecine war. She ends up traveling through Hades, questioning the sort of vengeance her ancestors prized, and ultimately learning the fate of her bloodline. John Bolton, known for his painted comics, provides the art. This time, though, he seems to have represented most of the characters by heavily manipulated photographs, treated to appear in a "painterly" style that blends in with his purely fantastic images. Carey has a lot of irreverent fun with his mythological sources—in an early scene, Proteus murders kindly old Baucis and Philemon, who were turned into trees for their piety—and if the result doesn't quite have the scope of Attic tragedy, it does satisfyingly wrap up some of Gaiman's unresolved plot lines.