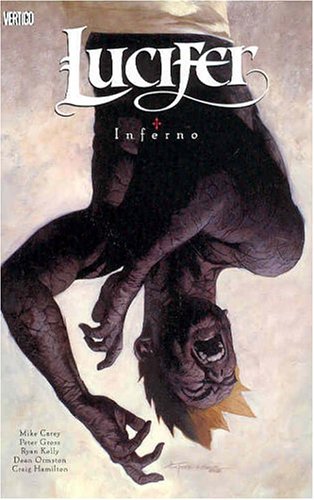 Yes, it's Lucifer Morningstar—former ruler of Hell, now a free agent dealing with the messy internal politics of his former domain—who is the protagonist of this Sandman spin-off comic book. Writer Carey is as irreverent as they come, but he also knows his theology inside and out, both Judeo-Christian and otherwise: King Solomon turns up, appropriately enough, in a hard-boiled detective role, and a few of the Norse gods put in memorable cameo appearances near the end of this volume. Lucifer himself is portrayed as a dapper man-about-town who can rip people's faces off when necessary. However, doesn't quite hold together as a book, since it collects three separate story lines, two of which are greatly indebted to other volumes in the series, and each drawn by different artists. (The third, "Bearing Gifts," is a short, stand-alone fable in which Lucifer doesn't actually appear, featuring the best art of the volume: squiggly, wobbly work by Dean Ormston that nicely gets across its sense of the uncanny.) "Inferno" itself is a mess of a story that picks up partway through with a cleverly metaphysical duel between representatives of Hell and Heaven, neither of whom are playing entirely according to the rules of their own side. "Come to Judgment," a cynical parable about the difference between justice and vengeance, features a witty twist on some fairy-tale conventions. The book has more than a few memorable moments, but new readers may be mystified.