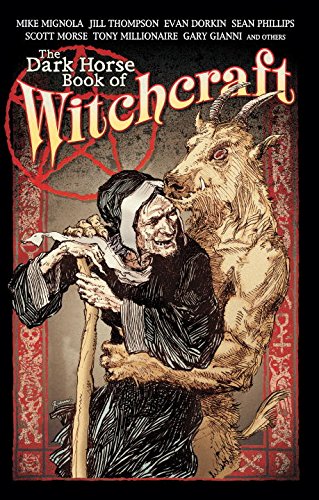 THE DARK HORSE BOOK OF WITCHCRAFT

This neat little collection is an interesting and sometimes stimulating hodgepodge that features stunning art by some top comics artists. Reflecting the shifting opinion of witches in both folklore and real life, the volume includes the idea of witches as agents of evil, trying to seduce ordinary people away from righteousness, and an interview with a Wiccan priestess. "Mother of Toads," a 1937 short story by Clark Ashton Smith, describes a young man's sexual initiation by a witch who wreaks vengeance when he insults her later. It emphasizes the loathsomeness of the sex act, especially with a fat old toad-woman; however, the young man certainly has sex on his mind and doesn't try too hard to resist. Mike Mignola's demonic psychic investigator Hellboy makes an appearance in the moody and atmospheric piece "The Troll Witch." Tony Millionaire's eccentric line art makes the familiar chant of the witches from newly eerie. Other superior pieces by Scott Morse and by Evan Dorkin and Jill Thompson further stretch our understanding of who witches are and how they should be combated. This is an anthology in which the parts actually support each other, so that even weaker items look good in context and may even cause a few chills.