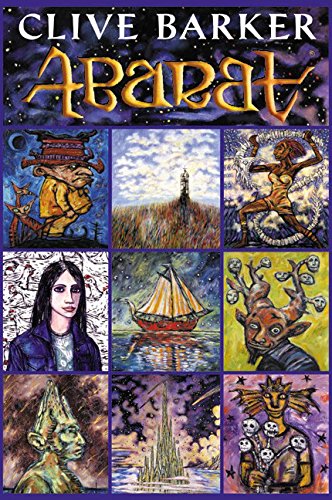 Like , Barker's first book for children, this tale finds a bored protagonist venturing into a fantastical world. The novel begins with a rather cryptic scene of three women on a "perilous voyage... [emerging] from the shelter of the islands." The action then shifts to Candy Quackenbush of Chickentown, Minn., who hates her life as the daughter of an alcoholic father and a depressed mother. One day, humiliated by her teacher, Candy skips out of school and heads for the prairie, where she stumbles on a derelict lighthouse and a creature with eight heads, John Mischief. The opening scene and the thrust of the novel gradually connect, as Candy begins an adventure to a mysterious archipelago called Abarat. Skilled at fantasy, Barker throws plenty of thrills and chills at readers. Candy becomes a pawn between Mischief and the man (Christopher Carrion, "Lord of Midnight") from whom Mischief has stolen something of great value. However, by the middle of the novel, readers may feel that Barker pulls out too many stops; he floods the pages with scores of intriguing characters and a surfeit of subplots (some of which dead-end, perhaps to be picked up in one of the three planned sequels). The author's imagination runs wild as he conjures some striking imagery ("Dark threads of energy moved through her veins and leaped from her fingertips" says one of the three women in the opening scene) and cooks up a surreal stew of character portraits (rendered in bold colors and brushwork, they resemble some of Van Gogh's later work). But much of the novel feels like a wind-up for the books to follow and, after this rather unwieldy 400-page ride, readers my be disappointed by so many unresolved strands of the plot. Ages 10-up.