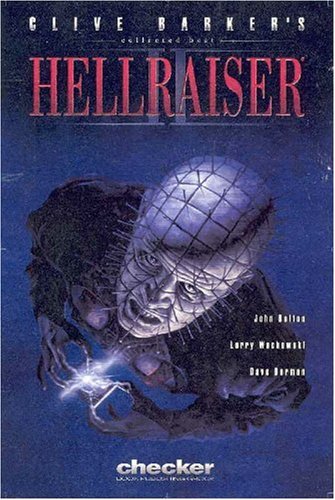 The stories in this uneven anthology come from the Epic comics series of a decade ago, which was inspired by a continuing series of horror movies, all of which originated in Barker's novella . Though the stories are set in different times and countries, they all show human encounters with the Lament Configuration. People who succumb to temptation and manage to solve the puzzle enter the domain of the Cenobites, hideously deformed creatures who inflict eternal suffering on anyone handy. So the fundamental subject throughout each tale is mutilation and pain, not simply death. Superficially, some of the stories resemble the gruesome 1950s horror comics that EC Comics produced with disturbing excellence. A few try to do more by exploring the attraction of s&m themes for a mass audience of Cenobite wannabes. Unfortunately, most of the contributors veer toward gross-out techniques. There is some good art here, as well as some interesting scripts, but they're seldom in the same story. The most successfully unified pieces are "Pleasures of Deception" (script by Phil Nutman; art by Bill Koeb), in which an artist is inspired by the Cenobites to discover a wonderfully new way of seeing reality; and "Cenobite!" (script by Nicholas Vince; art by John Van Fleet), which shows episodes in the life of the kind of man who'd be a willing recruit for this squad of master torturers. Those also, not coincidentally, are among the collection's least clinically graphic. They give readers a chance to reflect on what's going on, not just flinch.