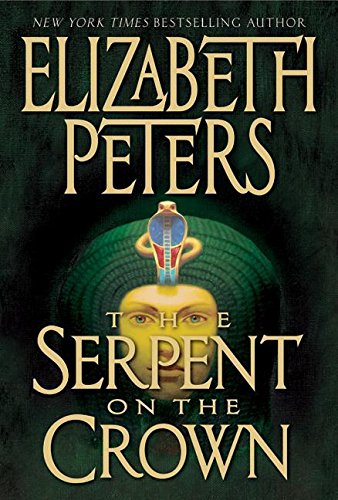 THE SERPENT ON THE CROWN

MWA Grand Master Peters delivers another winner that you can't put down and yet don't want to see end, the 17th entry in her bestselling series to feature Egyptologist Amelia Peabody Emerson and her extended family (after 2004's ). Early in 1922, novelist Magda Petherick, the widow of noted collector Pringle Petherick, interrupts the tea that the Emerson clan are enjoying on the veranda of their house by the Nile. Mrs. Petherick wants Emerson, Amelia's eminent archeologist husband, to dispose of a beautiful golden statuette that Pringle acquired shortly before his death because she believes it carries a curse. All are intrigued. News travels fast, and such a magnificent artifact soon attracts all manner of collectors, museum authorities, journalists and evildoers. Emerson's illegitimate half-brother, Sethos, formerly a dealer in illegal antiquities, arrives in disguise, but unfortunately he's followed by the gentleman he's impersonating. Tomb excavations, mountain treks, brutal attacks, an abduction, an exorcism and murder keep the plot hopping. The author's droll sense of humor and picture of a leisurely and less complicated age add to the appeal.